5-Card Omaha poker is a fun variation of Omaha poker. Each player is dealt five personal cards ('hole cards') that are unique to them. On the 'board,' five community cards are dealt face-up. To build the best five-card poker hand in 5-Card Omaha games, all players must employ precisely three of the community cards together with exactly two of their hole cards. There isn't anymore, and there isn't any less.

No Limit 5 Card Omaha Poker - A player can bet any amount up to their entire stack of chips.

How to Play 5 Card Omaha Poker

Each player is dealt five hole cards, and betting begins with the player 'under the gun' and moves clockwise around the table (immediately clockwise from the big blind).

Here are a few more tips to understand how to play poker:

Each player now has the opportunity to play his or her hand by calling or raising the big blind after seeing his or her hole cards. On this round, the action starts to the left of the large blind, which is called a 'live' bet. That player can choose to fold, call, or raise the pot. If the huge blind was 2, for example, it would cost 2 to call or at least 4 to raise. The action then moves around the table in a clockwise direction.

Each betting round continues until all active players (those who haven't folded) have made equal bets in the pot.

The 'flop' is dealt face-up on the board after the initial round of betting is completed. The flop is made up of the first three communal cards that are available to all players. The game starts with the active player moving clockwise around the button. A new round of betting begins.

In online poker, the 'turn' is dealt face-up on the board after the betting action for the flop round is concluded. In a 5 Card Omaha game, the turn is the fourth community card. The game starts with the active player moving clockwise around the button. A new round of betting begins.

The 'river' is dealt face-up on the board after the betting action for the turn round is concluded. In 5-Card Omaha poker, the river is the fifth and final communal card. The active player is the first to bet, clockwise from the button. Following that, there is a final round of betting.

If there is more than one player left after the final betting round, the last person to bet or raise displays their cards first, unless no bets were placed on the final round, in which case the player immediately clockwise from the button shows their cards first. The pot is won by the player who has the best five-card hand. Keep in mind that in 5 Card Omaha, players can only employ two of their five hole cards in combination with exactly three of the board cards. If the players with the best hands have identical hands, the pot will be split evenly between them.

A new 5 Card Omaha online poker game is ready to be played after the pot is given. The button now advances to the next player in a clockwise direction.

How to make a hand

Pot Limit Omaha 5 follows the same poker hand hierarchy as Texas Hold'em, with high cards (the weakest hand type, not even a pair) leading to the uncommon Royal Flush (10-Jack-Queen-King-Ace of the same suit), followed by three of a kind, straight, and flush, and so on.

There are four cards of equal worth in your five cards. The strongest hand is four Aces, while the weakest is four Twos.

Three-of-a-kind with a pair, or three cards of one value with two cards of another value. According to the value of the three-of-a-kind, a complete house comes in first. Example: K-K-K-3-3 beats Q-Q-Q-A-A.

There is no difference in value between the suits in poker, but be aware that hearts and diamonds, as well as spades and clubs, are not regarded the same suit!

There are five cards in a row, but they are not all of the same value.

Three of a kind

Three cards with the same value

There are two cards with the same value. A pair of Aces is the strongest, while a pair of 2s is the weakest.

If no one manages to make one of the above hands, not even a pair, the player with the highest single card is declared the winner.

With a few exceptions, 5 Card Omaha rules are the same for Pot Limit and No Limit poker games:

In Pot Limit 5 Card Omaha, the minimum bet is the same as the big blind, but players can always wager up to the pot amount.

Minimum raise: In the same round, the raise must be at least equal to the prior bet or raise. For instance, if the first player to act wagers $5, the second player must wager at least $5. (total bet of 10).

The pot's maximum raise is defined as the sum of the active pot, all bets on the table, and the amount the active player must first call before raising.

A player may bet a maximum of 100 if the pot is 100 and there has been no previous action on a given betting round. After that bet, the action goes clockwise to the next player. That player has the option to fold, call 100, or raise any amount between the minimum and the maximum. In this scenario, the maximum stake is 400: the raiser would first call 100, boosting the pot size to 300, and then raise 300 more, totaling 400.

There is no 'limit' on the number of raises allowed in Pot Limit 5 Card Omaha.

In No Limit 5 Card Omaha, the minimum bet is the same as the large blind, but players can wager as much as they wish, up to their whole stack.

The raise amount in No Limit 5 Card Omaha must be at least as big as the preceding bet or raise in the same round. For instance, if the first player to act wagers $5, the second player must wager at least $5. (total bet of 10).

The maximum raise is determined by the size of your stack (your chips on the table).

There is no 'limit' on the number of raises allowed in No-Limit 5 Card Omaha.

How a hand is played

With a maximum of nine players, Pot Limit Omaha is played. Four private hole cards are given to each player.

Pot Limit: How do you figure out how much you can raise?

Pot Limit Omaha is played as the name implies: the amount that can be bet is determined by the size of the pot.

The maximum amount is computed in the following way:

[amount required to call the big blind or last bet]

[amount in the pot after calling the big blind or last bet].

In practice, what is the largest raise feasible in the first round of betting with blinds of 10/20?

Let's keep going: the next player also wants to raise the most money possible. What is the maximum raise you can get? The formula remains the same:

The betting rounds and communal cards

The first round of betting in online poker begins with the person to the left of the big blind, just as it does in Texas Hold'em. With the action moving clockwise around the table, each player has the option to call (match the previous bet), raise (increase the stakes), or fold (leave the hand) in turn.

When one or more participants have equaled the largest bet, the first round of betting finishes. If no other player calls a player's raise, the raiser wins the pot without having to reveal their cards. This rule is true throughout the entire hand.

Following the flop, the second round of betting begins: three cards are handed face up in the middle of the table. Every participant in the hand has access to these three communal cards, which they can combine with their four private cards to form the finest five-card hand. (Remember, you must use two hole cards and three community cards to construct this five-card hand.)

The individual seated to the left of the dealer button is the first to act. In a clockwise motion around the table, each player may bet, raise, or fold in turn. When no bets have been put before your turn, you can check (not make a bet) just like in Texas Hold'em. If one or more players bet after you've checked, the action shifts back to you, and you can fold, call, or raise. We go on to the next round if all players check-in during a round of betting.

On the turn, the third round of betting begins: one card is dealt face up in the middle of the table. This fourth community card, like the flop, is available to all remaining players in the hand.

After the third round of betting, the fourth and final round of betting takes place on the river: one card is dealt face up in the middle of the table and is available to every player in the hand once more.

In the majority of online poker variations, the betting options are the same.

Here's a rundown of your legal options: 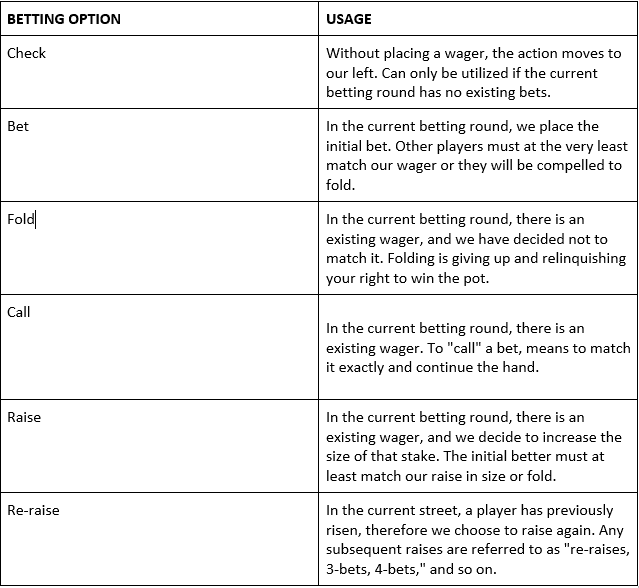 On the initial betting round (preflop), each player is dealt five hole cards, making 5-Card Omaha an interesting variant of Omaha. In traditional Omaha games, players are dealt four hole cards and must employ just two of them, as well as three cards from the community board, to construct the greatest possible hand.

5-Card PLO, like 4-Card PLO, is played with Pot-Limit rules, which implies that the maximum bet amount allowed equals the pot's total size. In 5-Card PLO, players are dealt five hole cards and must create the greatest hand possible utilizing two of them and three community cards. Omaha Pot-Limit has always been a game of chance.

The rules for 5-card PLO are the same as for 4-card PLO. You must forcefully make your hand using two of your hole cards and three of the five communal cards. The only difference is that you get an additional hole card, making a total of five. A lot of the 4-card action has shifted to 5-card once GGPoker debuted this format.

On the initial betting round (preflop), each player is dealt five hole cards, making 5-Card Omaha an interesting variant of Omaha. In traditional Omaha games, players are dealt four hole cards and must employ just two of them, as well as three cards from the community board, to construct the greatest possible hand.